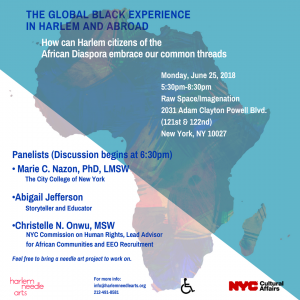 The Global Black Experience in Harlem and Abroad:

HNA continues to take the strides necessary to build the bridge through programming, developmental and educational tools and learning experiences that lead students, teachers, and/or class participants, to positions of leadership in cultural and art spaces and to be engaged with arts to inform how we decipher the world

Storyteller, dancer, author, and educator Abigail Ifatola Jefferson, M.Ed., conducts programs globally. Through a unique blend of story, rhythm, and yoga, she keeps alive stories and traditions from the African Diaspora. Audiences of all ages have described her programs as Spirit-filled, inspiring, and energizing!

In 2001, Abigail “Ifatola” Jefferson was initiated into the Yoruba Ifa tradition in Oyo, Nigeria in the Awise Baba Wande Abimbola’s compound. In June 2017, she was ordained as an interfaith & inter-spiritual minister by One Spirit Learning Alliance in New York City. She has also traveled to Egypt with Master Teacher Yirser Ra Hotep to study and certify in Kemetic Yoga.  Most recently, Abigail “Ifatola” just returned from South East Asia (Vietnam, Bali, and Thailand) where she performed storytelling, taught English and shared the dance of yoga.

Abigail has served as the manager of the Schomburg Center’s Teen Curators Program and adjunct professor for Lesley University’s Creative Arts in Learning program.  A resident of Harlem and founding member of the Rhode Island Black Storytellers, Abigail has released a beautifully illustrated children’s book titled Imani’s Heart: The Dancing Angel.

Christelle N. Onwu is a Lead Advisor for African Communities and an EEO Recruitment Strategist at the New York City Commission on Human Rights; she is also a 2017 Immigrant Civic Leadership (ICLP) graduate and recently served as an Adjunct Professor at John Jay College of Criminal Justice. Christelle is a fierce advocate for under-served populations with a focus on African communities in New York City. In her role at the New York City Commission on Human Rights, Christelle is charged with conducting outreach and educating the African community throughout the five boroughs about the Human Rights law. This is done via collaboration with various African community-based organizations, elected officials, and City Hall. Through this work, she organizes conferences and attends others with the goal of educating New Yorkers about their rights and share the work she does in the City. Christelle has organized several conferences such as the First and Second Annual African Forum and Community Resource Fair, respectively in 2017 and 2018; Human Rights in NYC’S African Communities: A Conversation; The 3rd Annual Iftar in the City; and Women in NYC Conference at John Jay College. In her role as Lead Advisor, Christelle sat on numerous panels such as the Humanity in Action Conference (2017); African Women Conference (Echoes Africa; 2017); Intersectionality Conference at Columbia University School of International and Public Affairs (SIPA); Women and Immigration Panel Discussion in Park Slope (United Methodist Church); Thriving Women Empowerment & Wellness Brunch (Soundview CPP).

Prior to joining the NYC Commission on Human Rights, Christelle worked as a social worker at Sauti Yetu Center for African Women and Families where she provided individual, family, and group counseling to survivors of intimate partner violence, sexual assault and gender-based violence. She published an article in the Columbia Social Work Review analyzing the issue of female genital cutting in the U.K. and made culturally-sensitive policy recommendations to reduce this practice. She graduated from Columbia University School of Social Work and is an alumna of John Jay College. Christelle’s research interests are gender-based violence, domestic and international human rights, and racial justice. She is fluent in French, Pidgin, and Eton.

Marie C. Nazon, PhD, LMSW, received her Master’s in Social Work from Columbia University, School of Social Work and her PhD in Social Welfare from CUNY Graduate Center. She has over 25 years of clinical experience in mental health in community centers, geriatrics, correctional facilities and college settings. Dr. Nazon is on the counseling faculty at The City College New York, SEEK Department of Counseling and Support Services, working with undergraduate students providing individual counseling, crisis management, group workshops, career and advisement counseling.  Her research focus is on immigrant students in college and the transformational impact of international education and service learning.  She is a Returned Peace Corps Volunteer and Former Fulbright Scholar in Senegal where she served as the social work consultant for a prison project under the auspice of the NGO Tostan International, an organization focused on women empowerment and sustainable development in West Africa. She has led study abroad and international service learning courses in Africa and the Caribbean. She is also a former board member of the International Youth Leadership Institute, an organization dedicated to increasing participation of African American and Latino secondary school students in international studies, travel and careers. An avid traveler, she has traveled to 4 continents, several Caribbean islands and has lived and worked in 11 countries in Africa. She is fluent in French and Haitian Creole.